The statement below was issued 25 April by the Central Committee of Natalia Vitrenko’s Progressive Socialist Party of Ukraine (PSPU), after a judge of the Kyiv City District Administrative Court formally rejected the PSPU’s lawsuit against the Ukrainian Ministry of Justice for refusing to register its amended charter.

As the AAS reported last week, European High Commissioner for Foreign and Security Policy Federica Mogherini has acknowledged the case and called on Ukraine to honour international standards for the registration of political parties.

The year 2019 is drawing near-the year of Ukraine’s next regular Parliamentary and Presidential elections. These will be the first elections after the ratification of Ukraine’s Association Agreement with the European Union. The promises of the bosses of the Euromaidan, to make Ukraine democratic, have become mandatory for the government, since the ratification of that Agreement. This means that citizens’ rights to freedom of association in political parties must be defended in the country, freedom of speech guaranteed, direct or indirect discrimination forbidden, and citizens’ ability to express their will freely in elections ensured.

The PSPU notes with regret, that in Ukraine today, the fundamental principles of democracy are being violated in the crudest ways possible, and a policy of discrimination and political repression is being conducted against parties that are out of favour, above all the PSPU. This means that it is impossible to have democratic elections for local councils, the Parliament of Ukraine, or the Presidency.

Evidence of this includes the following:

2016; and the XXXI Extraordinary Congress of 18 March 2017), by which the delegates to these party congresses, in accordance with the requirements of Ukrainian law, had amended the Charter and Program of the PSPU. Thus, for three years the Ukrainian government has impeded the activity of our party, blocking our participation in local council elections. Now the authorities are impeding our participation in the Presidential and Parliamentary elections.

Our party has been deprived of the possibility to defend its rights in an impartial court of law. Consideration of the PSPU’s lawsuit against the Ministry of Justice of Ukraine, in the Kyiv City District Administrative Court (Judge Fedorchuk), lasted from 25 July 2017 to 20 March 2018 (eight months!). The court proceedings themselves do not stand up under scrutiny: The representative of the Ministry of Justice of Ukraine failed to prove the lawfulness of its refusal to conduct legal vetting of the documents of the XXXI Extraordinary Congress of the PSPU and distorted the content of our Charter; on that basis, it refused to register the Congress documents.

Despite the howling, crude violations committed by the Ministry of Justice, Judge Fedorchuk rejected our lawsuit, thus allowing the Ministry of Justice not to conduct any legal vetting of our Congress materials. Moreover, Judge Fedorchuk delayed signing his court decision until yesterday, 24 April 2018, thus blocking our ability to appeal it to the Appeals Court and, further, to the European Court of Human Rights.

II. Law enforcement agencies of Ukraine, exemplified by the Ministry of Internal Affairs and the National Police, are taking no action to return to the PSPU its main office and the editorial office of the newspaper Dosvitni Ogni, which were seized by raiders led by A. Shatilin. The criminal cases opened in regard to that event are essentially not being investigated. The party is thereby deprived of the possibility of using its documents of incorporation; party archives; party, scientific and historical literature; video and photographic records of the PSPU’s 20 years of activity; party symbols; and a set of computer and duplicating equipment accumulated over many years. The bandits seized the personal data of party members, as well as pre-printed blank party cards. They thereby created conditions for the authorities and various of our political opponents to carry out all sorts of provocations against the party, based on fabricated "evidence".

The rights of the PSPU as tenants are being artificially impeded through the courts. Since February 2017 (more than 14 months!), the court proceedings on eliminating the obstacles to the PSPU’s making use of its main office have not managed to conclude.

III. The Ukrainian government is blocking the ability of the Progressive Socialists to hold mass demonstrations, inciting enraged Nazis against us. For example, Nazis attacked our demonstrations on 17 March 2016 and 9 May 2016 in Kiev, and on 9 May 2017 they blockaded

the apartments of PSPU leaders, smashed the doors, and threatened physical violence, thus impeding their participation in a holiday wreath-laying at the Tomb of the Unknown Soldier.

For political reasons, the police did not want to open a criminal case against the Nazis, despite court decisions obliging them to do so. But no investigation is being conducted, and no one has been punished. From May 2017 until the present, 11 months (!!!), the PSPU leaders have not been given an opportunity to defend their rights in court. During court proceedings, the National Police clearly demonstrated its lack of desire to carry out its legally mandated obligations to defend the rights and freedoms, under the Constitution and various conventions, of the Progressive Socialists and our supporters.

IV. A deliberate informational blockade is in effect against our opposition party. PSPU representatives are barred from speaking in the national or regional media, in gross violation of the Law on Political Parties in Ukraine and of freedom of speech, which deprives us of the opportunity to inform voters about our evaluation of the reforms being conducted.

The PSPU Central Committee believes that, instead of democracy, a Nazi dictatorship is being established in Ukraine, which is incompatible with the concepts of democracy and democratic elections.

Chairman of the PSPU Natalia Vitrenko 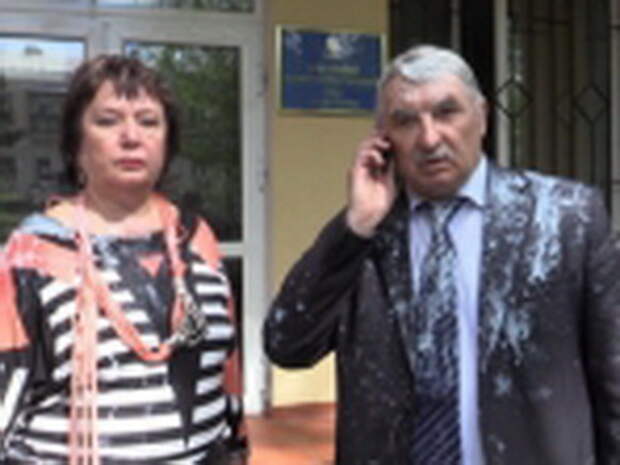 24 Apr.-Federica Mogherini, the European Commission’s vice-president and high representative for foreign and security policy, has responded to a parliamentary inquiry made 20 February by Member of the European Parliament Marco Zanni of Italy, on the Kiev regime’s attacks against the Progressive Socialist Party of Ukraine (PSPU), led by Dr Natalia Vitrenko. Zanni had asked if Mogherini was aware of the Ukrainian Ministry of Justice refusal to register the PSPU’s amendments to its statutes and programs, adopted at three PSPU congresses in 2015-17 "to bring itself into line both with the new rules on political parties in Ukraine".

Without such acceptance by the Ministry of Justice, the PSPU is unable to field candidates for office. Parliamentary and Presidential elections are scheduled for 2019.

Zanni asked if Mogherini were aware of the case, and whether "she does not consider this case to be a serious violation of freedom of thought and political expression, bearing in mind that the PSPU is one of the main opposition parties?"

Mogherini’s reply went beyond a form letter, stating, "The High Representative/Vice-President is aware of the case and cannot comment on an ongoing court case. Full respect for international commitments is an intrinsic part of the value-based relationship between the EU and Ukraine. Fundamental freedoms are regularly addressed at all levels in the EU-Ukraine contacts and exchanges as necessary. The EU encourages and supports the ongoing democratic reforms in Ukraine. In this context, international standards on the registration and activities of political parties should be duly observed." (Emphasis added.)

In the interim between Zanni’s question and the official reply, a judge in the Kyiv City District Administrative Court on 20 March rejected the PSPU’s lawsuit against the Ministry of Justice, refusing to compel the latter to conduct legal vetting of the party documents in question. The judge delayed issuing his decision in writing until 24 April, thus stalling the PSPU’s ability to appeal it, as the party intends to do.

On 26 April another Kiev court dismissed the lawsuit by Vitrenko and PSPU Deputy Chairman Vladimir Marchenko against the city police department, for refusing to intervene on 9 May 2017, when black-shirted thugs from the fascist Azov Battalion’s youth group had blocked and vandalised their apartment doors. The two former MPs had been unable to leave their homes and attend wreath-laying ceremonies in commemoration of victory over fascism in World War II.

As Vitrenko and Marchenko left the court building, a group of thugs attacked them once again. They were doused with kefir (liquid yogurt), as the attackers chanted slogans of the S-14 group, named after the "14 words" of an American white supremacist slogan. Just one day earlier, 56 members of the US Congress had written to the State Department, urging official condemnation of the Ukrainian regime’s open support for Nazi gangs. The US Congress has also outlawed funding for the Azov Battalion, now a unit of the Ukrainian National Guard. The US politicians, however, fail to acknowledge that Azov and associated organisations were key organisers of the Western-backed overthrow of Ukraine’s elected President in 2014.